Family Owned & Operated For Over 85 Years

General Info
Curry’s Termite, Pest & Animal Control is a fifth-generation family owned and operated pest control company based in Little Rock with additional locations in Pine Bluff and Monticello. Serving central Arkansas since 1926 and with over 92 years of service, we are Arkansas’ oldest exterminating company! At Curry’s Termite & Pest Control Company, we specialize in treating and eradicating termites and all common household pests including ants, roaches, spiders, mosquitoes, bed bugs and more. Our services also include animal removal and control, moisture control, wood decay prevention, and small home repairs.
Email
Email Business
BBB Rating
A+
BBB Rating and Accreditation information may be delayed up to a week.
BBB Accredited businesses follow the BBB Code of Business Practices and pay a fee for accreditation review and monitoring. Accreditation is not a BBB endorsement or evaluation of the business’ product quality or competency in performing services. 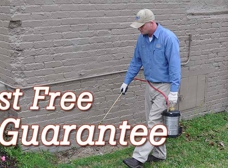 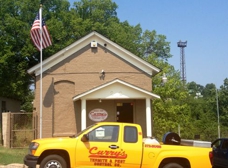 It was a Sunday afternoon. The cats and I had just cuddled up on the sofa to watch a recording of the ESPN special “40 Minutes of Hell” about the 1994 National Champion Arkansas Razorback basketball team. The beginning of the special was very dramatic, with dark lighting and suspenseful music. Just as the music built to a crescendo, there were some big drum bangs and then a bang that was so loud it rattled my chimney! We all jumped out of our skins and then the cats all raced straight to the fireplace! Still not sure what in the heck was going on, I paused the recording and sat quite still. Then I heard the frantic scratching in my chimney. Something had fallen into the chimney and was desperately trying to get out! Assuming it was a squirrel, I tried to figure out how to “fix” the problem without re-creating the scene from ‘Christmas Vacation’. I finally decided the only way to fix the problem was to open the flew and let the chips fall where they may. So, I held my breath and slowly opened the damper, but the only thing that came out were some leaves – which I thought was weird. And still there was the scratching… So now what? It's a Sunday afternoon, and who do I call for a squirrel in the chimney? Well, I looked in the phone book, and Curry’s Pest Control (who I use for spiders and ants), had an off hours emergency number! I called. I asked if they “did” squirrels, and they said yes. I said I wanted the squirrel out ALIVE. They still said yes. I half-expected Larry, Darrell and Darrell to show up with a sack, but instead here comes this great guy with these BBQ tong-like things. (He got there really fast too!) He said he had just returned from a wildlife training seminar and was thrilled to have the opportunity to use his new skills. He got a flashlight, and I fetched a cat crate for him to use for the critter. He looked up into the chimney and found himself eye to eye with a scared little squirrel. Still visualizing ‘Christmas Vacation’, I asked if it was time to turn on the video camera on my phone. He said, “No, I’ve got this. This is not gonna be a Chevy Chase situation.” Wrong. LOL He grabbed the squirrel, the squirrel got loose, jumped onto the guy’s head and into the living room! SQUIRREL!!!!! Let me just say that you’ve not lived life fully until you’ve been trapped in the house with a squirrel, 3 big cats and an ambitious pest control guy… Additionally, when I bought that pretty oriental rug, I just never imagined seeing a squirrel sitting on it. Hahaha. The squirrel was totally focused on getting outside to the trees and stayed pretty close to the windows. Fortunately the cats never got really wound up into “chase mode”. Instead they were in all-out “stalk mode”. The guy stayed focused, calm and professional. He cornered the squirrel and put the crate down with the door open. He used the tongs and nudged the little guy into the crate, took him outside, took a picture and let him go. This guy was great – calm, cool and professional. He pointed out to me that there was a nest in my chimney cap (hence the leaves in my chimney) so I guess this week we’ll have to relocate the furry family in the penthouse… I’m just profoundly grateful for our mild winter and that I hadn’t built a fire all season – and especially before we cuddled up on the sofa yesterday. I guess now we’re all going to get some flea medicine… oh well, it was a fun day anyway. Bottom line: Curry's rocks! I've used them forever at work and at home. They're great!