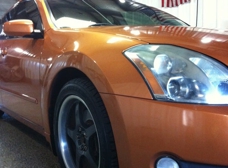 I contacted this business in order to set up a interior detail and no one answered so I left a message. I never received a call back.

I called again because I had a groupon that was about to expire and was told that he was full for the week and I should've called sooner. He was extremely rude and condescending and offered no help, only aggravation, when I expressed my concern.

Others have told me that they had received poor service here but I hated to pass on a good deal. I should've listened. I hung up the phone feeling chastised and that is no way to treat a paying customer.

He has definitely lost my business and I urge you to look elsewhere for your car detailing needs.