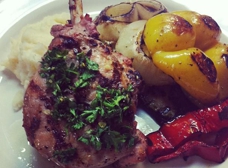 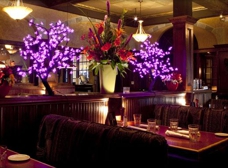 we went there and our waitress was rood.because we sent our food .make it right and it wont be sent back.crust was like eating rubber

This was not very good food at all and the service was even worse. If you don't really care for flavors or good service, this is the place for you. However, if you enjoy eating GOOD food and want food and service equal to what you are paying, look elsewhere.

The food was gross the service was bad and they charged my debit card three times!!

My family and I were traveling from out of town. We were looking for a place where we could have a nice meal and chill together after being apart for the previous two weeks. We were dressed casual. Shorts. It had been 100 degrees that day. What's new in OK, city in August, right?
Initially we thought we were too dressed too casually, but the proprietor told us we were fine and made us feel welcome. From that moment on, we left everything in his hands. The menu is amazing. There is something for everyone at this restaurant. The menu ranges from killer appetizers, pizzas, excellent seafood, steaks, house specialties, and smoking desserts. We asked the our host to order what he thought were some of the best items on the menu.

We started the dinner with Baked Brie en Croute, Chicken Brochettes, and the ""World Famous"" clam chowder. Our favorite was the clam chowder, which was full of bacon and delicious. My wife is from New England and she gave it her stamp of approval. The other two appetizers were tasty as well.

For entrees the stand outs were the Cedar Plank Salmon and the Duck Breast with Strawberry Pomegranate Port Wine Sauce. These two entrees would hold their own against any Salmon and Duck we've ever had. The Fettuccine Alfredo with chicken and the Filet Mignon were very good, but no different than any we've had before.

We finished off this fabulous meal with Creme Brulee and Chocolate Cake. They were the perfect end to a perfect meal.

I have eaten here several times and it's always been good. The last time I had dinner here I tried the ""Chef's Selection"" where the chef asks if there are any foods you don't like and then you get a 4 course meal paired with wine...it's pricy at $75/person but you get a TON of food. I could only eat about half of it and my gf was eating a lot of it too...we had lots of leftovers! and the food was just unbelievable-a nice baked brie, some small little appetizers in between, chilean sea bass with all the fixings and 2 or 3 sides, then a 12 oz sirloin steak with 3 more sides and then a berry parfait and THEN a big piece of chocolate cheesecake. UNBELIEVABLE.
Highly recommended experience for a ""special day""

The Deep Fork continues to be one of my favorite places, another on my 'required monthly dining' list ! The atmosphere is great and comfortable, yet affords privacy when needed, ask for a curtained off booth if you want to be alone with someone special. The food is always outstanding, and the daily specials, especially 'fish' dishes are among the best in town. The wait staff is professional and goes out of their way to add to your dining experience. This is a classy place at noon or dinner and you will not be disappointed !

Just check the profiles of the reviewers- they have 1 or 2 reviews. Always 5 stars for Deep Fork and poor reviews for their competition. I will not go to this restaurant for this reason alone -->> BOGUS REVIEWS!!!!

This is an outstanding restaurant. The food is excellent. Can be a bit crowded, so expect a wait.

Outstanding service and attention to detail from the valet, bartender, servers and management. Shaun F is the best server in house. They will accomodate any need you may have. The restaurant is just gorgeous always decorated in a sophisticated way to go with the season or holiday at hand. The food is superb from the pizzas on up to the chef's special. You will enjoy yourself celebrating that special occasion or a casual dinner or drinks with friends. I am a regular and the minute they see me walk in the door my favorite beverage is already being prepared.

Great food, great taste. Excellent presentation. Marvellous service.
I LOVE IT !!!!!!!!!!!!!!!!! it is my favorite restaurant.
Pro: great food.
cons: NONE !!
I Highly recommend this restaurant !

What a difference. The Deep Fork Grill has transformed from an average dinner out to a truly amazing experience. The food is outstanding, fresh and creative. The service is perfect, Casie was our waitress. And what great environment! I love going to a restaurant that isn't the same boring chain format that has no imagination. Deep Fork is one of the top 5 in Oklahoma. You will enjoy it.

Best service in this town. They pay attention to every detail. Food was excellent, and took care of every special need I had for my party. Great atmosphere. Great for special occasions, or just for cocktails with friends.

I went to this restaurant yesterday and it was simply wonderful. The manager was very friendly and welcoming. He went out of his way to make sure we had a great meal. The food was great and so was the service. I will definitely return here and recommend this restaurant to anyone.

I was taken to Deep Fork for an interview...I walked in and was very pleasantly suprised at how nice the interior was decorated. The service was just right and the food was simply great. The prices were reasonable and all around, I was pleased...Deep Fork will be a new restaurant I will frequent with regularity.