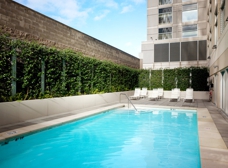 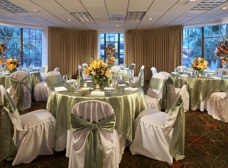 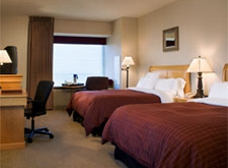 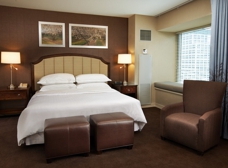 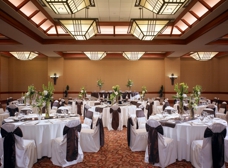 So much fun here. Went to a friends 50th birthday party here. Nice place. Great private rooms. Cool bar in the middle of the lobby.

Hope you're having a good day. I stayed in room 10_ _ something on November **th for 1 night. First of all, I did not request a handicapped room. I am not handicapped then why was I given one? I was too tired to come down to the front desk to replace the room to a regular one so I thought it would be okay. Biggest mistake. The toilet seat was broken in the room. Maybe the maintenance should take a look at it. The walk in shower is not so great. The water from the shower still leaks from underneath the shower curtain and made a puddle on the floor by the toilet, despite the fact I had 2 towels on the floor to soak the water. So, the next day I decide to leave, Your Valet Parking people are so rude. I come down at 10:00AM. The PRICK, yes i am using the term PRICK.. tries to charge me for the parking $50.00 when it clearly says 25 bucks for 1 day maximum. For Lord's sake I was in at the Hotel for less than 12 hours knowing the fact I checked in at 10 o'clock. So, the PRICK in a beanie says, It'll be just a moment. 10 minutes go by, 20 go by. I ask him once again, how long it would take, again he says just a minute. In the meantime, another guest comes down. says he has lost the ticket to the valet car and he'd like his car back. And the Prick looks him up by the guest's last name and room number and brings his car within 10 minutes. And here I am standing in the rain for almost 30 minutes now. I ask the Prick to give me my goddamn keys and he says, ""I can give you the keys, but you cant get your car back because it's parking in the locked/hidden section of the garage."" I was beyond pissed at that point. I could care less for Grand Sheraton. I just wanted to get the fcuk out. Thanks to the Prick, I was late to the event I was trying to get to. . I would never come back at this Sheraton or at any other Sheraton knowing the fact that Sheraton doesn't really give a S**T about their Guest. all they need is money out of Our pockets.

Hope you keep on ripping people off,
Good Day Sheraton,
Much Love from an Unhappy Guest.

We love this hotel its great place to enjoy a night out on the town or a relaxing weekend.

I stayed at the Sheraton over New Year's Eve. It was one of the most memorable experiences I have ever had. Those guys know how to through a party. The food in the restaurant was superb and the service was even better. The hotel Ambiance is a combination between classic and contemporary. Great atmosphere and their lobby lounge is one of the best bars in town. I highly recommend this hotel.

We really enjoyed our short time at the sheraton. The staff was both friendly & helpful. Our room was nice & clean, and the bed was very comfortable. Our view was also very beautiful. The hotels proxcimity to the capitial, shopping and fine resturants was also great!

The first time I stayed here for business purposes and have returned several times. The lobby is open and airy - the restaurant quite good and the location is convenient. If you can get an internet rate or coporate rate it is a good value.

The staff at the Sheraton was wonderful! My company and I held a conference there and the staff members were courteous and helpful. The food was great. The rooms were clean and well taken cared of. Parking is right next-door. It's close proximity to the Capitol and shopping malls is a plus. I highly recommend the Sheraton for either business or pleasure