Claim your business to customize this page and more!

Parking: Lot, Self, On Site, Free 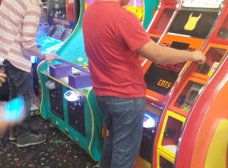 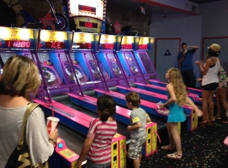 They have definitely upgraded their arcade games including a really cool laser room you have to go through. They also have a batting Cade and mini golf. Perfect date night.

Awful place! I am not spending a single cent of my money there ever again! The staff at the arcade was unbelievably unprofessional, rude and just plain awful. My child attended a birthday party for a friend that was held there and wanted to play at the arcade. I went to the counter to get tokens for the arcade and at a time had $10, they told me that the only way to get tokens was from the machine, which I did. Then on token machine was the price written for 120 tokens for $25 which looked like a good option to me. So I put $20 bill in the machine and it immediately gave me 80 tokens (that's what you can get for $20). At which point I went back to the counter and told them that I wanted a $25 option, but the person at counter told me that that was a special and I could only get a special deal at the counter and not at the machine and there was nothing she could do about that. I requested to talk to the manager who told me exactly the same thing. I asked her to show me where it said that I could get a special deal at the counted and she pointed out at a small sing on the machine which I saw before but did not even realized what the special deal it was talking about. I pointed out to the manager that the sing was not clearly written and I did not understand what it meant. She replied that the sing looked clear to her and there was nothing she could do about it. Needless to say how upset I was at that point. I told her that it was not fair and that they should give me what they advertised for, but she said that the only way I could get those 120 tokens for $25 only if I bought them at the counter. She then started leaving and when I tried to talk to her more she just told me that that was it and if wanted to stand by the counter for the rest of the day I could do just that! And then she just walked away! I was so shocked; I never had anyone talk to me like that before. This is beyond outrages. Needless to say that my day was ruined and I was really upset for the rest of the time before the party had ended. Never again I am going to step my foot there, never again I am going to spend a single penny or accept another invitation for the party if it's going to be held at that place.

I love going to Castle Park. It's cheap and fun. I don't care much for the arcade and have never gone near the batting cages, but when there isn't much to do on a warm evening, this place is a great option.
A round of mini golf is about $6.50 for an adult and there are 3 courses to choose from. There are a lot of neat decorations to look at and and the courses are pretty challenging. They are also open late, closing around 11 or 12 on the weekends.
If you go before noon they offer a discount, as well. Just beware of Sat night crowds that can keep the courses backed up..

MINI GOLF! Still fun after all these years.

The arcade is normal and fortunately does not have violent games. Several miniture golf courses, all with good cahllenge so parents don't get bored, but not so ahrd that little guys aren't crying.

So I went here with my girlfriend just because we thought it would be kind of funny, but it turned out to actually be fun. The mini golf course was well kept and definitely challenging. You can get 30 pitches for 3 bucks in the batting cages which isn't bad at all, and the arcade seemed like it had a lot of options. All of this fun hinges on whether or not you mind the junior high kids making out on the hole in front of you, but it's definitely a great place to take kids, or if you're just looking for a cheesy/funny date, why not lose your pride and take her here instead of Dolce.

The arcade's ok, most people just watch the guys on Dance Dance Revolution try and show off. I'd prefer the mini golf. The batting cages also give a team discount for an hour of pitches, which is very nice.